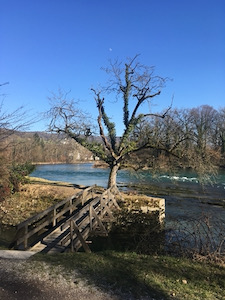 With a promising winter's day forecast we met up with Diana & Luis to do a walk around Turgi, kindly organised by Diana.

There was quite thick fog when we arrived, so we decided to walk along the river, and save the ascent of the hill to later in the day in the hope of better views. We crossed over the Limmat and then headed downstream following the east bank, past the merging with the Aare.

The sun had burned through the fog by the time we stopped for lunch near the PSI institute, and we took a short break there before crossing over the Aare and heading back upstream on the west bank. The experiment with enjoying a cigar whilst walking was only partially a success - the girls setting a pace that made for slight difficulty keeping the cigars alight whilst walking and talking, but it made for a nice change. We continued in bright sunshine and lovely weather back to Vogelsang where we stopped for a lovely slice of Diana's rhubarb cake and a kaffee fertig.

From there it was just a short walk back to Turgi, with no-one particularly inclined to walk up the extra hill for the views!

Overall it was a very pleasant and relaxed 15.3km with 180m of ascent/descent and an easy T1. The gpx plot of our route is here. 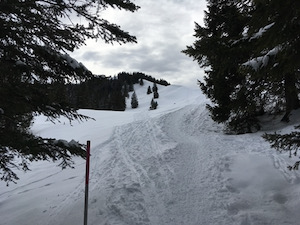 It wasn't the best day to go snowshoeing - the originally anticipated sunshine giving way to grey cloud, but keen to get out I headed over to Biberegg to try route-0815 from www.schweizmobile.ch.

I parked at the small ski lift in Biberegg and headed up the hill following the typically well signposted path. The route climbs steadily through farmland and then into woods, where I joined the route that we have done previously. At the top of the climb I was treated to spectacular views over the Rigi, alps and Vierwaldstaettersee, which we hadn't seen teh last time.

I had lunch admiring the view and watching the skiers (the resorts seemed to be well frequented), before continuing and dropping down to Herrenboden. From there decided to do the extra loop around Mostelberg since I was making good time. I took a slightly different path (which was a bit off-piste), and was quite grateful to come out eventually right by the top of a drag lift before heading over the skybridge and back on down to Biberegg.

Overall the day was 13.6km and 800m of ascent/descent which took me 3 hrs 25 minutes moving time - so a fairly good day snowshoeing. It's a T2 (I reckon) and the gpx plot of my route is here. 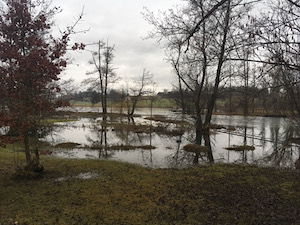 With a bit of a dull day forecast, but keen to get out of the flat and stretch our legs, Jules and I headed off to do a variation on walk #12 from our favourite book Rund um den Zuerichsee.

It had been forecast to be dry for a few hours, but that only lasted for the first stretch, and it was raining pretty steadily by about a third of the way. We decided to cut the route short and to head back - neither of us particularly inclined to get soaking wet.

We did manage to see some Storks at the Luetzelsee - to our slight surprise, and the route was perfectly pleasant winding through small woods and farms in fairly rural ZH.

Overall it was 13.8km and 220m of ascent/descent and took us 2 hrs 35 with only one stop in a forest hut to have a cup of tea and some of Ernst's cake (which was very nice). The gpx plot of our route is here. 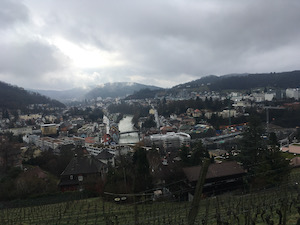 With a pretty uninspiring day forecast, but keen to get out and be a little bit sociable, Jules and I headed over to Baden to meet up with Diana, Luis, and Imke to do a short walk around the city.

The weather was as bad as forecast - light drizzle earlier in the day but brightening up a bit later. We headed off to do the city walk that we had previously done back in 2017, but reckoned from the outset that we might only do the first half.

The views over the city were fine, and the route is still good, but the weather made it a bit less enjoyable than it could have been. We arrived back in Baden after a bit over 5km, and decided to head down to the river front for a cup of tea and biscuits, rather than do the second half of the walk.

It was nice to get out for a bit, and to meet up with some friends after having spent most of January in lock-down, even if the weather wasn't brilliant.

Overall it was a pretty short walk - 5.6km with 270m ascent/descent which took us 1hr 25 minutes (plus a lot more time chatting). It's an easy T1 and the gpx plot of our route is here.

With a beautiful day forecast in the mountains, and keen to get out and enjoy it after a few days of grey in Zurich, I headed over to Brunni Alpthal to go snowshoeing.

I chose the longer route, as I wasn't in much of a hurry and conditions were lovely. The route was slightly longer than I had planned (owing to a slight navigational error [cough]), but it was all alright in the end.

I made good time up to the Furgellenstock hut. It was closed this time, but I ate my lunch in the sun on the benches outside. Refreshed, I continued on up to the top of Furgellenstock, which was quite well frequented with people enjoying the stunning views across the Alps.

From the peak, I continued around to top of the cablecar at Holzegg (inadvertently going via the skihaus Holzegg at the very top, and nearly heading down the toboggan run), but I made it safely around and then it was a easy descent down to the valley.

It was a lovely day out, with spectacular views in great weather. The forecast temperature was quite cold (-10 °C) but it felt warm in the sun, and I spent most of the day in the tried & tested shirt + baselayer combo. The route was 10.1km, with 750m ascent/descent and took me 2hrs 35 plus the stops for lunch and photos. The gpx plot of my route is here.