A series of photographs on the theme of urban flora and fauna. Each image is meant to show a juxtaposition of flora or fauna against an urban background. Nothing grown, tended or domesticated for the main subject.

These photos are part of a project that I've set myself, to help me get out and take more photos and to learn how to use my camera better. They haven't all come out as I would have liked, but I've included them anyway! 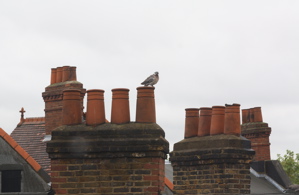 A dull, grey, wet afternoon (great British summer), one of London's ubiquitous pigeon was preening and shaking and generally trying to tidy itself up, to little avail.

The patchwork of red chimneys and rooftops provides a good splash of colour, which the picture certainly needs. Ordinarily I'd be concerned about the flatness of the sky, and the slightly washed out colours, but in this case I think they add to the overall mood of the shot. Taken through a glass window, and unfortunately there's some blurring caused by rain-drops, but otherwise it's the shot I wanted to take. 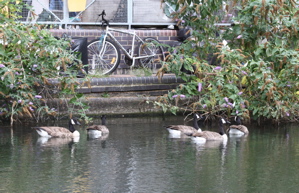 Cycling along Regents Canal, a flock of geese were feeding on the far side of the water.

I took at lot of variations on this shot, before selecting this one, itself a slight crop from the original. The challenge was to get the appropriate juxtaposition and proportions of the geese and the background (which was more of a challenge than it sounds) without either particularly taking dominance. I think the overall composition is fine, but the picture lacks for variation of colour and saturation. Also the detail on some of the geese is lost in the flowers and bushes behind, and you have to look more carefully than I'd like. Overall it's fine though. 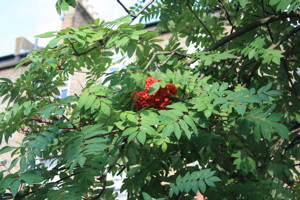 The bright red berries on this fruiting tree were in stark contrast to the green leaves, and the light bricks of the building behind, and were caught by the setting sun.

The shot from this angle has a lot of green foliage, which almost completely masks the building behind. The shot is in danger of simply being about some red berries in a green tree, without the urban environment to provide the contrast. Bit of a "What's the story?" shot. 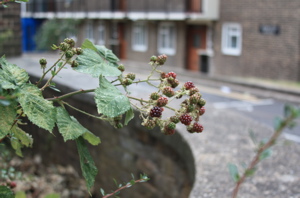 Outside a housing estate in Westminster, in one of the ubiquitous Rhododendron bushes, a blackberry bush was flourishing. The contrast of the colour of the ripening fruit against the grey concrete and dull red brick, as well as the juxtaposition of the elements caught my eye

It would have been good to have waited a few days before taking this shot, to allow the fruit to ripen a bit - at least one blackberry fully black and juicy would have completed the shot well. Also the light on the day wasn't great, and the shot has a slightly dull, washed out colour. Lastly the composition could have shown better the siting of the bramble, sitting in the middle of another bush. Take more time, and don't be scared to come back another day. 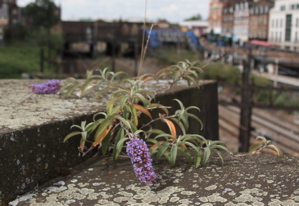 High up on a wall overlooking a railway line, this plant was struggling to gain a foothold in the concrete, and had succeeding in putting out a couple of flowers.

I had to go back the next day to re-take this shot, which is a good lesson in not rushing the first time! The live-view mode on the camera proved useful here, as the shot was high up, and impossible to use the viewfinder without a step ladder. The focus isn't quite right, which becomes obvious in close up, but otherwise it's the shot that I wanted to take (2nd time round, at least)!