A series of photographs on the theme of Disrepair, Disuse & Decay. Items have to be recognisable for what they once were, but clearly no longer in use. All should portray a sense that time and circumstances have moved on...

These photos are part of a project that I've set myself, to help me get out and take more photos and to learn how to use my camera better. They haven't all come out as I would have liked, but I've included them anyway! 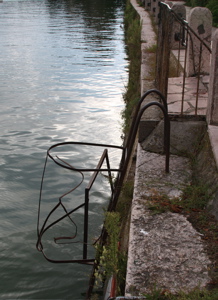 In the late afternoon, walking around the lakeside in Tata, Hungary we came across this old metal ladder, which I suppose would have been used, at one point, to access the lake, but now bent, broken, and rusted.

It's not quite the shot I wanted to take, the reflection off the water means that the exposure is significantly less than I had orginally guessed, and so the ladder is almost in silhouette. This means that the colours aren't as vivid as I wanted them to be. I don't think there's a simple way around this, aside from taking the shot from a different angle, or at a different time of day (probably a couple of hours earlier). On the other hand, the smooth, almost oily quality to the water does add something to the picture, so I'm not wholly disappointed with it. This is a slight crop of the original, but I think the shot needs some of the surrounding elements to give context to the ladder. 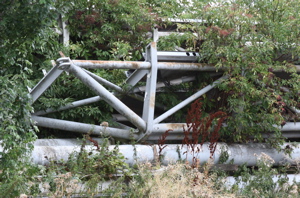 This metal framework may have been left here for storage, and possibly for eventual use, but bushes have grown up and through it and it's now lying discarded and forgotten.

After some deliberation, I went for a significant crop of the original shot, as I felt that the wider context didn't actually add anything, but the crop brought out the detail of the bushes and the metal cross-beams. Otherwise the shot shows some nice contrasts between the white of the metal and the greens and browns of the foliage. Overall, it's fine, but not my favourite - I suspect it's a little lacking in a story. 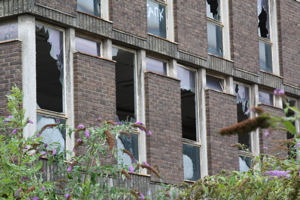 This old red-brick building has long been abandoned, and all the windows broken. The area around has become overgrown (as in the foreground).

An interesting exercise in cropping, this one. Some of the other shots had fewer windows, but I eventually went for this number, to give a sense of scale for the overall building, but retaining detail on each window. Otherwise, the depth of focus isn't quite right, I think that either all the shrubbery should have been out of focus, or all in - not some and some as the shot actually is. The colours are a bit washed out, but to some extent that's in keeping with the theme of the shot. 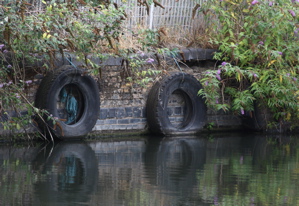 Along the canal, these old tyres were hanging against the side, where boats would have moored to load and unload, but the wall behind has decayed and has been fenced off.

A slight crop to make up for the limitations on my zoom (the shot was taken across the entire width of the canal. Otherwise I haven't done much with the shot. I like it, and I'm not quite sure why. The colour saturation isn't particularly great, there's no subtelty in the depth of focus. I suspect that the slightly stereotyped/clichéd idea helps the shot greatly, as perhaps does the delicate reflections. 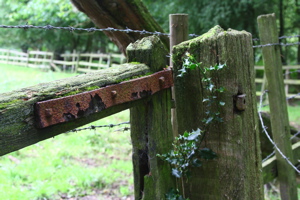 Walking in the woods near Ashridge Park Estate, I passed this old broken gate, with a rusting hinge framed against the light green of the field behind, and with a young ivy tree growing in the shelter of the post.

I spent a lot of time trying to get this shot right, playing with colour spaces and exposures and I'm still not sure I managed to capture the subtlety of the greens and the vividness of the colours Perhaps a slightly larger depth of focus to ensure all the main subject is in focus, but overall I like it - the colour and detail on the rusty iron comes through particularly well, I feel. 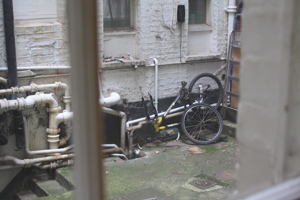 Passing an old lightwell, in the centre of a red-brick mansion house, I spotted that someone has left a mountain bike part disassembled, to rust.

I'm not entirely sure what hasn't worked in this shot, but it isn't as powerful as I'd hoped. I suspect it's a combination of the washed-out colours, nothing to hold the eye, the fact that rust on the bike is quite subtle, and the fact that the wider environment isn't portrayed or shown. In fact this is a shot where more cropping only detracts from the overall effect. 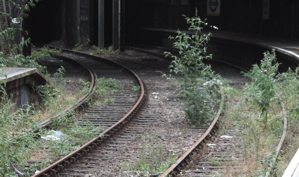 I'd long wanted to take this photograph, having watched the scene go past many times, and I finally made the effort to be there, with my camera on a good day. My efforts were slightly marred by the attentions of "Dave" (employee number not posted here - I'm not that malicious) of TFL who started hassling me for taking photographs on the underground, quoting vague "security" reasons and threatening the involvement of the British Transport Police. This was the first time I've been hassled for taking a photograph, although I strongly suspect it won't be the last....

This is quite an extreme crop of the original photograph, which was in portrait, and followed the tracks from bottom left to top left, albeit at the cost of much more extraneous surrounding detail. I'm going with the crop because it captures the real essence of the scene.

The saturation isn't deep enough for my liking, I would have liked more time to play with the exposure and white balance (but see comments above), and perhaps the angle of the shot. Otherwise it's the shot I wanted to take.