A collection of macro photographs which I've taken. In some cases these haven't all come out as I would have liked, but I've included those ones too! 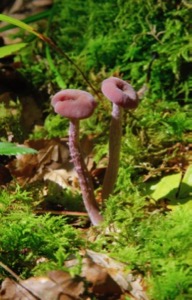 A late summers day in the woods near Forch in Zurich. I went to the woods equiped with camera, tripod and accessories to take some photos. This slightly unusual mushroom was nestling at the base of some stacked logs, the vivid purple colour catching my eye.

This is a crop of the original, to take out some of the unnecessary background, and to focus on the mushrooms. The challenge with that is that the proportions of the photo are unusual, which I'm not entirely sure about. Otherwise I like the colours, the saturation, and the contrasts, which make for a pleasing composition. Other shots that I took on the same day suffered from being all green, or all brown, whereas in this shot the mixutre of bright and darker greens, plus the brown leaves in the background seem to accentuate the purple of the mushrooms themselves. The focus is fine, much benefiting from the use of a tripod. 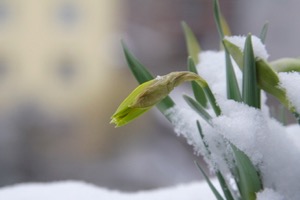 Glancing out the window after a late snow fall, I saw this early spring flower poking out of the snow. The shot was taken with a tripod, and fairly quickly as the snow wasn't lasting long. The light was quite challenging - a very grey and dull day, taken slightly in shadow.

Technically the picture isn't great, the cropping and composition are neither here nor there, the background colours don't really contrast or enhance the foreground, and the colours are never really going to pop without being oversaturated. That said I like the overall effect, and I think the easy and happy story goes a long way to compensate for all the technical inadequacies of the shot. 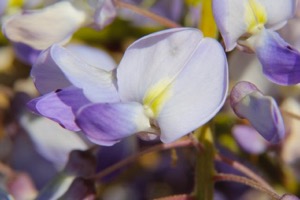 Keen to get out and experiment with a new extender tube, I found these Wisteria flowers nearby and with a good midday light tried to line up the best shot I could. It took a few shots to get the settings broadly right, but that's all part of the learning process, I guess!

The colours and overall coposition I quite like, although it's a simple flower portrait. The depth of focus is set very long, but is still quite narrow - I think that's the effect of the extender tube - but it does result in a bit of a challenge with the shutter speed - this was at 1/125 without a tripod, in excellent light (full sun from behind). I think the background actually adds to the photo slightly - giving it a bit more interest. All in all, it's fine, but it's not going to win any awards...

Flower on a beach - Alentejo 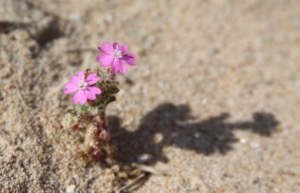 Walking on a beach in Alentejo in the same place as the shot below, I saw this small flower growing in the sand next to the dunes. I think of the plant as struggling, but actually on closer inspection it seems to be thriving in conditions that might be challenging to other plants.

The shot is a bit basic, but the focus on the petals is quite good, and the overall framing of the plant with the shadow works quite well. If I'm being quite critical (I think you have to with a shot this simple) then the focus on the stem of the plant could be a little sharper, because the eye is drawn to the colour, but you can't really see what they are.

Shells on a Beach - Alentejo 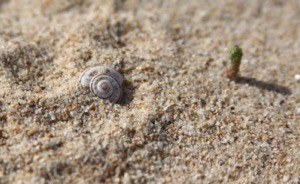 Walking on the beach in Alentejo I glanced down and saw these tiny shells dotted in the sand in some dunes. I had the general purpose 28-135mm lens, and the good light made the shot relatively easy technically.

This is one of those photos that I quite like, but I couldn't tell you why. Technically I think it's fine, the depth of focus is quite severe, and possibly I could have tried to get the plant slightly more in focus, as in full screen view it's a little too blurred. The grains of sand come out quite nicely round the shell, and the overall shot tells a nice story. I think this is an example of less being more. 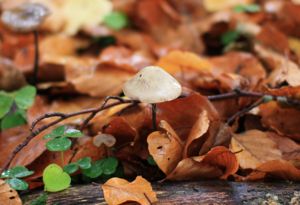 Walking in the woods in rural Denmark, on a slope leading up from a pond I came across this tiny mushroom growing out of the side of a log. I only had a 30mm prime lens (50mm equivalent on a full frame sensor), so there wasn't much chance for magnification or zoom. To compound matters I didn't have a tripod with me, so the shot was a bit of an exercise in bracing, focus and patience. This is quite a severe crop of the original photo, which was limited by the lens. If those circumstances sound familiar to the ones below, it was the same log....

This is quite a severe crop of the original, forced because of the lens. Otherwise the picture is kind of fine. It's not going to win any awards, but I like it in little ways. The white of the mushroom helps the overall pallette, as do the small green leaves. It might have been better to increase the depth of field to try to get the smaller mushroom to the lower left of centre also in focus - something to try next time...

Tiny Mushroom growing out the side of a log - Denmark 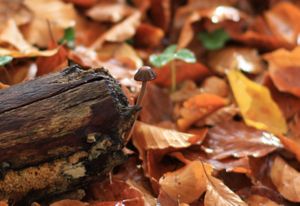 Walking in the woods in rural Denmark, on a slope leading up from a pond I came across this tiny mushroom growing out of the side of a log. I only had a 30mm prime lens (50mm equivalent on a full frame sensor), so there wasn't much chance for magnification or zoom. To compound matters I didn't have a tripod with me, so the shot was a bit of an exercise in bracing, focus and patience. This is quite a severe crop of the original photo, which was limited by the lens.

It doesn't quite work. I'm not sure if that's because of the colour palette (it's all brown) or because the story isn't compelling. I suspect the latter, if I'm honest. It's not awful, and I'm not entirely sure what I would do differently next time, given the same equipment. Time to buy a tripod, and a macro lens - at least then I'd have fewer excuses.... 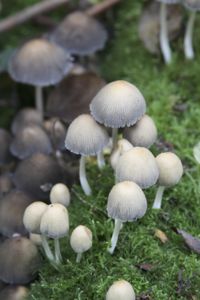 Walking through the local woods, having a "photo morning" I came across a moss covered log with small white mushrooms growing out of the top, framed by more grey (possibly more mature ones of the same kind) mushrooms in the background. The light was pretty low in this part of the wood - under fairly heavy tree cover, and thick clouds overhead, and I didn't have  a tripod which had a impact on the shot I was trying to take. It took a lot of attempts to get this shot, trying different angles and settings.

I really like this photograph, although there are some technical criticisms -  the focus isn't quite perfect on the white mushrooms, and the depth of field is a little too narrow - it would have been good to have all of the whites in focus. I was somewhat constrained by not having a tripod to had, which meant that I was having to play shutter speeds off against aperture sizes against how still I could hold the camera to avoid motion blurring.  I like the simplicity of the composition, and I think the picture tells a nice story. The colours and saturation could probably be improved a little, but I don't think the image particularly suffers for that.

Overall I'm pretty pleased with what I managed to achieve, although with more practice and the right equipment I think it could have been better.