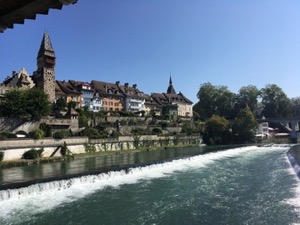 With a lovely day forecast, and the rivers sensible but with a bit of water, I headed down to Bremgarten to paddle down route #90 to Brugg.

The river was in good form, a nice steady flow but not too tasty. After exchanging a few words with a couple of kayakers I headed off gently down the river. As usual the rapids just below Bremgarten were a good wake-up, but no issues at all in the packraft. I made good time downstream, mostly drifting in the steady flow, but occassionally paddling.

There were the usual waterfowl and I did see one fairly small trout (I'm always happy to see fish in the rivers - it's so rare in Switzerland). The kayakers overtook me a bit before the rapids at Göslikon-Fischbach, and I didn't see them again en-route.

I exited the river in the usual place at Gebenstorf, before heading back to town. I was slightly burned by the SBB app which sold me a bus ticket for a bus stop that was half a kilometer away, and on the other side of the river! 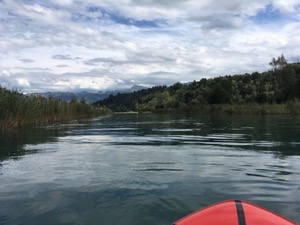 With a slightly cool and overcast day forecast, but running out of summer, I decided to head to the Linthkanal to try out the route from Ziegelbruecke to the Zurisee.

I'd not used my packraft in about a year, and I was the only person I could see out on the water, so it wasn't very reassuring to see the rapids on the train, and to start near the fastest flowing section of the kanal. However, after giving myself a short talking to I resolved to do it.

I really shouldn't have worried - the packraft is rock solid, and easily rode the two small sets of standing water with no issues at all. Once past those it was a gentle but steady drift down stream all the way. One note for next time - there's an entry point downstream of the second rapids at approximately lat 47.13950, lon 9.05379, in case they're a bit too tasty.

The flow in the kanal was stronger than I expected, averaging about 6.9km/h, so the scenery went past quite quickly. I saw lots of waterfowl, particularly in the Naturschutz area at about the half way mark, but the highlight of the trip was a young stoat who was scared and curious in equal measure. I also acted as the obligatory landing pad for one dragonfly who came with me a for a good few hundred metres down the canal.

The flow in the canal dropped at the end, and I started paddling between Grynau and the motorway bridge. I continued past the end of the canal and around the shoreline to finish at Schmerikon, chuckling at the buoy that had been made into a minion. 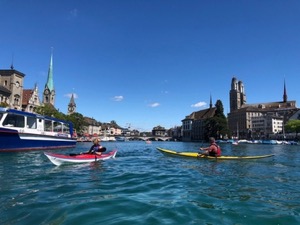 For my birthday this year, Jules kindly arranged a Sea-kayaking tour on the Zurisee, along the lakeside for a little way, and a short trip into town.

We had rearranged the outing, hoping for better weather in summer, and we certainly weren't disappointed. We set off from Wollishofen in glorious sunshine and paddled gently along the lakeside enjoying the views, and dodging the occasional rowers and SUP-lers. The buildingsin Bellevue were particularly striking from the water, and the centre of town was lovely in the sunshine.

Arrving at the foot of the lake, we took a brief tour down past Le Raymond bar (interesting to see it from the water, after many occassions looking out), to the canoe-polo pitch, and then a trip a little way down the Limmat. We then headed back along the lake-side to round off a lovely outing, having thoroughly enjoyed seeing Zürich from a slighly different persective.