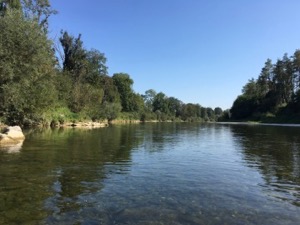 With a lovely late summer day forecast, and keen not to miss the last opportunity to go paddling this year, I headed over the Andelfingen to try route #40 along the Thur, then joining the Rhein and on to Eglisau.

It was a bit of an inpromptu trip, and I headed out a bit later than I would otherwise have planned. However, I arrived in Andelfingen and made my way to the riverbank and set up. The Thur was flowing quite gently - at about the lower recommended limit, but I drifted gently downstream enjoying the summer sun.

I was very pleased to see some trout in the river, in fairly plentiful numbers around the nature reserves. I was also treated to the sight of lots of herons and even one kingfisher

When I eventually joined the Rhein there was a fairly strong flow, however a little way downstream this slowed down, and with the sun starting to set behind the steep hills I started to paddle just to make sure that I arrived in daylight. 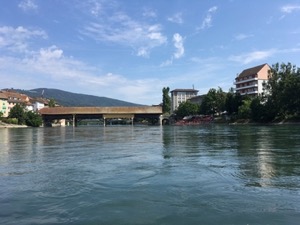 Keen to make the most of the good summer weather, I headed to Olten with my packraft to try two sections of the National route #1 from Olten to Arrau and then from Aarau to Brugg.

The Aare is flowing much more slowly here than in the upper section before Bern, and therefore I was paddling for most of the day. The river was quiet and peacefull - in stark contrast to the previous day, and almost empty. This section of the river is used fairly extensively for power generation, and so there was a bit of portage around the weirs, which is definitely easier in a packraft than a kayak or canoe!

I stopped for lunch in Aarau, just below the powerstation, which was a welcome break. Unfortunately I left my blue cap behind (I think), and didn't realise until I was too far downstream to go back and search for it. The most excitement for the day was a personal escort from the army past some exercises that they were conducting - the boys kindly turned off their engine to paddle alongside me - not sure how happy they were about that!

There was a fairly stiff breeze on the Aarau - Brugg section as the river turned north at Wildegg. By that point I was getting a little tired, and quite possibly dehydrated (need to sort out the water situation for these trips), but I arrived in Brugg with no real hassle or problems. The landing point in Brugg was in particularly pretty spot - or maybe I was just grateful to get there. 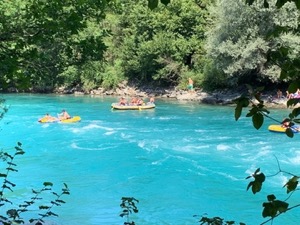 For a bit of a change of pace, Jules and I headed down to Uttigen with Diana and Luis to paddle (drift) down the Aare to Bern.

We weren't alone in the idea - there were loads of people on the river and a steady procession of rafts floating down. There was a bit of a queue to get in the water at Uttigen, but in typical Swiss style it was all very friendly, chilled out, and orderly.

We tied the boats together - Diana & Luis' three man boat and my packraft, and drifted gently down the river. The girls enjoying a pink champagne whilst the boys were working hard on navigation and boat handling [cough].

We stopped for a BBQ lunch on the island near Hunzigen - Cervelats and sausage plus a salad, which was a great idea. We restocked with beer - having drunk more of our supplies than expected - before heading off

We drifted into Bern, all of us having a little swim in the river on the way. We pulled the boats out of the water just past the Badi, and then relaxed in the park whilst the equipment dried, before heading to the station.

Overall it was 24 Km, and we were on the water for about 4.5 hours, including the break lunch. The flow in the river was 160 m³/s, and a nice steady flow. 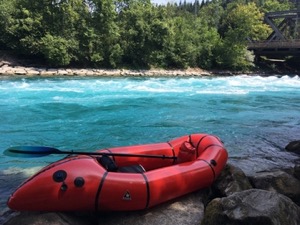 With a lovely day forecast - 30 degrees & sunny - I decided that it was the perfect day for paddling and headed to Uttigen to travel down the Aare to Bern.

I took the train from Zurich, which was a 2hr journey and very full. I arrived at the Aare at Uttigen to find that I very much wasn't alone - plenty of other people were taking advantage of the good weather to spend a day on the water.

The drift down the river was very relaxing, and I was (apparently) the perfect landing spot for dragonflies. The river is very pretty with the stunning background of the alps to the south. I spotted lots of places to stop and have a picnic on the way (for next time), but on this occassion I just headed on to Bern. I did take the opportunity tod do some boat handing practice in the many eddies along the side of the river, which was good fun & experience. 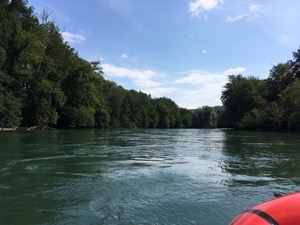 For my first proper outing on the packraft, I headed back to Bremgarten to have a go at route #90 down the Reuss to Brugg.

The flow in the river was much more sensible than my last visit, and within the recommended range for paddling. I wasn't the only person with the idea - there were half a dozen groups setting up at the entry point, and a steady stream of people down the river.

The paddling was very easy, although I did give up and just drifted downstream for the second half. The route was pretty easy - just a couple of sets of rapids to shoot, and of course the mandatory exit before the weir in Brugg. I was pleasantly surprised by how well signed the route was, in particular the points where caution was required.

All the equipment worked well - including the addition of the sponge which will definitely be accompanying me on future trips. The only thing that I took but didn't need was the lifevest - I'll be leaving this behind next time, it's not necessary on this kind of trip. 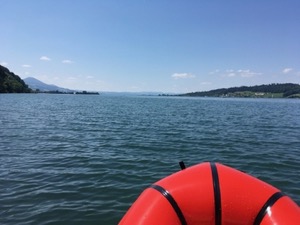 After an aborted attempt at route #90 (along the Ruess from Bremgarten to Gebensdorf), owing to the river being in full spate and flowing too strongly, I travelled down to Schmerikon for a bit of a paddle about and to have a proper try with my new packraft.

I started out with a gentle paddle about - cruising around the shoreline trying out the raft with a bit more purpose. Short, faster strokes seem to be better than longer strokes. and I struggled a bit with stopping the paddles touching the sides of the craft (which makes a loud rubber noise), but overall the packraft is pretty easy to use, and feels very stable and safe.

On the way back I had a bit of a play in the stronger currents where the Linthkanal joins the Zurisee. I was pleasantly surprised with how responsive the craft is - probably because it's very light - it accelerates well and can actually maintain a decent top speed for a few seconds

Overall managed 6.2km in 1:15, so a decent average speed. The gpx plot of my route is here.