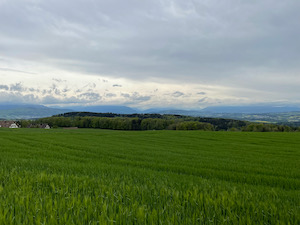 With not-particularly-inspiring weather forecast, including the threat of rain showers Shep and I declined a longer ride and instead headed off to do a loop of the Buchenegg and Albis passes - the classic duo.

We met up a little way down the Sihl near the Fork & Bottle and headed off on the route. We decided to do the Buchenegg pass first, expecting there to be less traffic, and then back over the Albispass.

It was my first time over the Buchenegg (not sure how I've avoided it for so long), but it wasn't too bad. We took it fairly easy, the roads were quiet, and the route seems well sheltered from sun and wind as it winds up through the trees. From there we descended into the Aeugstertal valley and looped around behind the Aeugsterberg where we fortunately saw both the Rigi and Pilatus (Shep tells me you have to do the loop again if you can't see them), before heading to the foot of the Albispass.

It's a much shorter climb over the Albispass from the far side. Once over the hill we headed back to town via Laetten with a quick view over the Zurichsee. We finished up in Rio bar for a well earned refreshment, although we didn't hang around for long as it was a bit chilly once we stopped moving.

It's a lovely route, and I can see why it's a classic. It's good value for money, a bit of climbing without having to travel too far, with pretty countryside and quiet roads. The 43.2km with 720m of ascent/descent took us 2 hours 5 minutes and a fairly gentle pace. The gpx plot of our route is here. 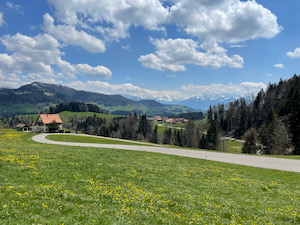 Taking advantage of a break in the bad weather, I decided to head off and do a variation on cycle route #15 - Bachtel from Veloland Zürich.

Still trying to avoid public transport where possible I decided to extend the route by cycling to & from town. It was nice to warm up down the side of the lake before turning north and heading up the hill to Hinwil, and from there the climbing continued up towards the Bachtel. I declined the final ascent up to the radio mast, but the route climbs nearly as high above Wald, past Büel and Chli Bäretswil getting up to almost 1,000m.

From there it was a very nice descent into Neuthal before heading on to Bäretswil and Kempten. I was feeling a bit rubbish (not entirely sure why) as I past through the town, but it was a useful experience and practice to reduce my effort a little but to cycle on through. I continued on past Mönchaltorf and very slowly over the Pfännensteil, but I was feeling much better by the top. From there there it was the usual cracking descent back into town to finish off a good day out.

Overall it was 94km with 1250m of ascent/descent and took me 4 hrs 25 at an overall relaxed pace. I think I need to do a few more multi-hour warm-up rides before I attempt anything more challenging. 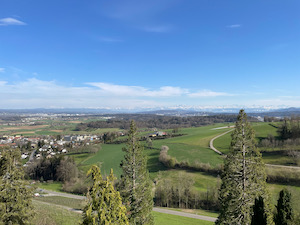 With a lovely day forecast, Shep and I headed up to Schaffhausen to do a gentle ride back to Zürich, taking in some of the sights of the Zürcher Unterländ.

We started a little later in the day so that it would be a little warmer, but unfortunately this also meant that there was a bit more wind than first thing in the morning. However, it was lovely and sunny and warming up nicely as we had a bite of lunch by the Rhein in Schaffhausen before setting off.

We broadly followed the planned route, heading first east, and then looping back past Eglisau and on to Kaiserstuhl. We then turned south and decided to head on up to the top of Regensburg before heading back to Zürich via Höngg.

The route was lovely - very well navigated and picked by Shep. The only three slight wrinkles were the near constant head-wind which seemed to peak for every climb (that's my excuse anyway), a puncture at about the 20km mark (fixed fairly quickly), and a group of motorbikers who were very upset that we weren't cycling in line (on a minor back road). Overall though it was a lovely day out and we were treated to great views of the Alps en-route as well as the rolling hills of the Unterländ.

Overall it was just shy of 80km with 850m of ascent/descent which took us 3 hours 45. We finished with a beer from Viadukt sat in the sun in Josefwiese park - a lovely end to the day.

With another lovely spring day forecast, Shep and I decided to head out for a spin, Shep on his new (self made) road bike.

The chosen route was from Zürich via Uster and the Greifensee then on to Pfäffikon and finally up Sternenberg. From there we looped back via Bauma and Mönchaltorf and over the Pfännensteil before dropping back down to town.

It was a great route (and excellently navigated by Shep). It was a lovely day out with great views over the Alps. We were able to see from Säntis to Pilatus and lots of the alps in between. We saw quite a lot of wildlife including kites and falcons, and even saw a farmer ploughing a field with horse-drawn plough.

We finished up by the lake in Zürich for a quick recuperatory drink, to finish the day overall at 88km and 1,150m of ascent/descent which took us a shade over 4 hours. Personally I found it a little hard work (I was a little out of practice cycling perhaps), but Shep looked completely fine, obviously. 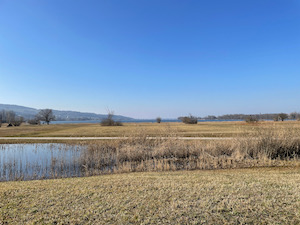 For old times sake and with a lovely day forecast I headed out to do a lap of the Greifensee.

It was really great weather for an early spring ride - bright and sunny and around 11°C. The Greifensee track was in good use by cyclists and skaters, and the footpath around the lake was also being well used by walkers.

Although I was on my road-bike I did use the cycle-path and took it a gently on the way round. There was a bit of a headwind on the far side of the lake which was a good warm-up for the climb over Fällanden to get back to town.

Overall it was a good & gentle stretch of the legs at 44.5km with 400m ascent/descent and took me 1hr 55 without particularly rushing. 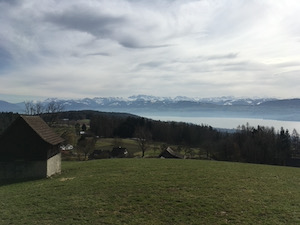 For the first ride of 2021 I headed out to do a loop of the Greifensee, and then feeling quite good in the legs I continued up the Pfannensteil before looping back to town.

It was a bit of a shakedown ride for my Fratello, having replaced the chain during the winter. Unfortunately the gears were still jumping a bit, so I think that some more work will be needed to get the bike back into proper shape (next to replace the small cog at the front, I think). Overall though, it was a nice ride, even though it was slightly more overcast that originally forecast.

The route was as good as ever - the cycle paths along the Greifensee are always very pleasant and the slightly longer ascent of the Pfannensteil which I prefer had been improved by the extension of the cycle path all the way up to the Col, which was a very pleasant surprise.

I was lucky enough to see a young stoat playing in the grass just below the top of the hill - identified by the black tip to it's tail, but still mostly in its white winter coat. I stopped briefly to enjoy the views from Saentis to Pilatus before looping back to town.

It's always a good route, and this was no exception. This variation was 53.5km with 530m of climbing and took me 2hrs 20 pedalling.