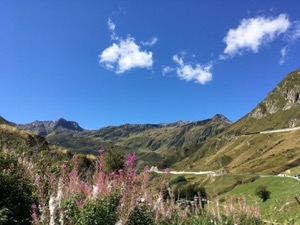 With the Covid-19 disruption continuing, the planned cycling holiday had to be cancelled. I decided to make use of one of the train tickets and I headed down to the top of the Oberalppass to do the start of the route. I had intended to do at least the first day, and ended up doing the second day to Chur as well.

The journey down was uneventful, except that the train transfers were easier than I feared, and in all cases the departing train waited for all the passengers. In hindisght it would have been fine, even with loaded bikes (gotta love SBB!)

It was beautiful weather when I arrived, and stayed bright and sunny for the whole day. It wasn't as cold as I expected on top of the Oberalppass, and it warmed up quickly as I descended into the Rhine valley. The route was easy to follow, although the unpaved sections were quite rough in places. I was able to keep up a decent speed on my ToutTerrain, but it would have been significantly slower on the Fratello, especially with panniers.

I made good time to Ilanz, and decided to press on to Chur. The only significant climb of the day was out of Ilanz, but it wasn't too painful except for the headwind which just increased in strength all the way to Chur. I arrived in good time in Chur and took a fast train back to Zürich, very happy that I'd decided to make the best of a slightly dull situation. 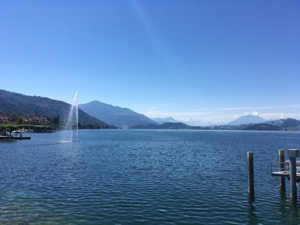 With a lovey day forecast, and keen to blow out the cobwebs, Michael and I headed out on one of our usual rides - over the Albis pass and onto Zug for lunch, then looping back to town via Sihlbrugg.

We met as usual in Rio, and then after a coffee (and a slice of cake for yours truly) we headed off along the Sihl. The weather was very kind to us, and there were plenty of other people out enjoying the bank holiday sunshine. After the usual fun of the ascent of the Albispass - 13:54 for me, from the golden Löwen sign to the Albispasshöhe sign at the top - a bit faster than last time, but to be expected as I was on my road bike, we headed on down to Zug. We were treated to specatcular views of the Rigi and Pilatus and further along the alps in glorious sunshine, and some (still) snow-capped peaks.

we arrived in Zug in good time for lunch, and stopped at the Restaurant Widder in the main plaza. An acceptable pasta for me, and a good burrata with truffle for Michael. Fortified and rested we headed back via the usual little heartbreaker (no forestry going on this time) to Sihlbrugg and then had a cracking run down the Sihl valley with the wind at our backs.

Overall it was 62.4km with 580m of ascent/descent, and took us 2 hours 35 minutes of pedaling. The gpx plot of our route is here. 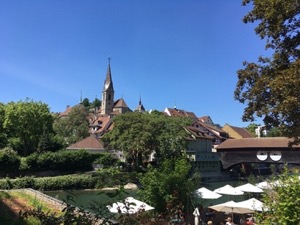 For a bit of a change of pace from the usual walk, Jules and I cycled to Baden to meet up with Diana and Luis.

The weather forecast was perfect for cycling - high twenties and a slight breeze, and after a relaxed morning we headed off. We picked up route #66 in town and followed that out along the Limmat all the way to Baden. The route was a bit more rough than we remembered (I was glad to be on my touring bike), but possibly we were more focused on the rain last time we did the route!

The path along the river was well used in the glorious weather, but we also saw some nature, including some trout in the river and a family of swans with what looked like 5 or 6 cygnets. We made fairly good time to Baden, arriving in about 1 hour 45 for the 30-odd kilometers. Unfortunately when we arrived the favourite pub was closed owing to Corona, so we found succor in a burger bar and then decamped to Frishluftbar on the waterfront. The coffee and beer was pretty good, and it was lovely to sit out by the river.

We declined the cycle ride back to town and instead headed home on the train - probably for the best after a couple of beers! 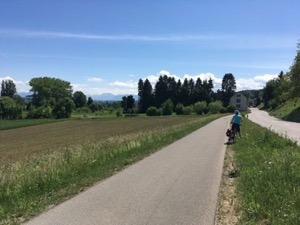 Keen to get out of the flat and get a little exercise, Jules and I headed off for a cycle around the Greifensee.

It was a pretty relaxing ride in lovely weather - 25°C with a slight breeze. We headed out through town (taking the long route) and then headed around the Greifensee in an anti-clockwise direction. Jules (re-)discovered the advantages of drafting on the long straights, which were slightly into the wind. There were claims of being considerate to the other people by cycling in single file, but also a lot of giggling and comments about how easy cycling was from back there.

We weren't the only ones keen to get out - the paved path around the lake was in good use by cyclists, rollerbladers, and even one skateboarder, but everyone was pretty chilled out and considerate. We stopped at the cafe in Bad Egg for a refreshing smoothie, which was very good. The flowers were in full bloom, and a little further around the lake we were treated to the sight of storks nesting, and even glimpses of some chicks.

We took the brave decision to head back over the hill which wasn't too bad. Overall it was a bit over 45km, and we were peddling for about 2 hrs 30. 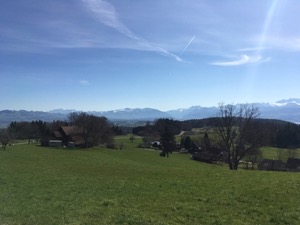 Lucky with a lovely day for a cycle ride - bright and sunny but not to hot, I headed out first ride of the season. I picked my normal Fällanden / Pfännensteil loop for a nice mix of gentle climbs and good cruising.

I took the slightly slower and quieter route along the side of the Greifensee, not being in a particular rush or looking to set any records. There were lovely views over Speer, the Churfusten, and the Glarner group in the distance as a I headed alongside the lake. I made good progress up to the Pfännensteil where I was treated to fantastic views all the way from Saentis to Pilatus and the Rigi.

I continued on the loop in bright sunshine, and arrived back in slightly over 1 hr 40 minutes, for a bit over 40km of cycling. A lovely morning and a great start to the season.