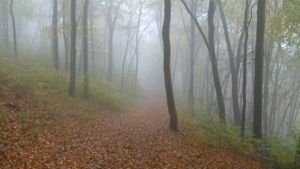 Feeling like we hadn't been out of town in a while, Jules and I set off on a wet and grey November morning to have a crack at the Saturday Walkers Club route # 140 - Wendover Circular

This turned out to be a cracking route, despite the best efforts of the English autum to ruin the views, and the fact that it was quite muddy in places which made the going a little tough. We saw a kestrel and a monk jack deer, but otherwise it was very quiet, with not much wildlife or fauna for company. We did the route in reverse , which meant we stopped at the cafe in the woods for an early cup of tea, and then at The Old Swan in Swan Bottom for a bowl of chips - a very nice and cozy old-world pub. Overall the 12.6 miles took us about 5 hours, including lunch and one other break (about an hour in total), and we'd be very happy to come back here - particularly in Autumn when the beech leaves are turning, and hopefully next time when the sun is shining and the views are at their best.

The big change for this walk was that we tried out the Motion X GPS app for the iPhone, which combined with the GPX plot from the SWC website (above) and a Sea to Summit iPhone case was a cracking combination. It'll take a lot for me not to head off with a 1:25,000 OS map, but on this occassion it didn't leave the backpack... 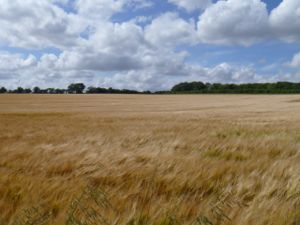 With a rare free weekend coinciding with a good weather forecast, Jules and I headed down to Kent to walk a section of the Pilgrims way, which follows the North Downs way from Charing to Canterbury.

Originally we had planned to do just the first day of a two day walk from The Rough Guide to Walks in London & Southeast England, the 11 mile stretch from Charing to Chilham, but we made good and steady progress so decided to tack on the additional 7 miles to Canterbury as well.

The walk itself was very pleasant and very quiet, with hardly any people about - which we thought was a bit strange given the weather - but we weren't complaining! Overall we'd rate the walk as 7/10 difficulty, but that's mostly due to the overall length - there weren't many hills overall. The weather was quite kind to us, sunny intervals in the morning and brightening up in the afternoon to become a glorious evening as we entered Canterbury.

We lunched in the Flying Horse in Boughton Lees, but wouldn't particularly recommend it - it had a slightly funny atmosphere and the food wasn't all that great and we certainly didn't hang around once we were finished eating. Much better was the afternoon tea in Chilham, at Shelly's Tea Rooms which really was delicious and certainly helped us complete the second half of the walk...

Highlights from the walk (aside from Shelly's scones) were the beautiful West Gate Gardens at the old entrance to Canterbury and the slight surprise in the grass. 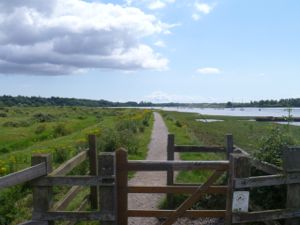 Many thanks to Andy for organising the a walk around Wivenhoe in Essex – including when to catch the ferry (both times). After weeks of terrible weather the sun came out for the walk, and we all ended up in shorts and t-shirts and thoroughly enjoying the spell of proper summer.

The walk itself was 9.25 miles, and rated 2/10 toughness as there aren't many hills in that part of the world. We followed the route in walk #30 in the Saturday Walkers' club, which is taken fom Time Out Country Walks volume 1.

All in all the route took us about 5 hours, including breaks, lunch and catching the ferry. We ate in the Rose & Crown in Wivenhoe which wasn't very good, and quite busy because of the regatta going on right outside. In retrospect taking the ferry over to The Anchor in Rowhedge would have been a better plan.

All in all the walk was fine owing to the good company and the first day of sunny weather in ages, but I don't think we'd rush back to do it again. 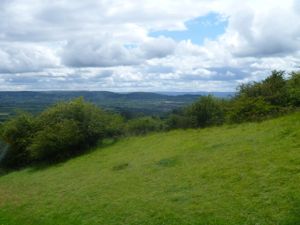 Finding ourselves in the Cotswolds on a summer afternoon we decided to head off to the Vale of Evesham for a walk from the village of Beckford.

The walk itself was quoted as 10 miles, heading up from Beckford and looping through Ashton under Hill before ascending to the top of Bredon Hill. There was only one steep ascent, otherwise the walk was fairly stead on good paths and without much trouble navigating. All in the walk took 4hrs 25 minutes, including a stop for lunch and breaks.

We saw a Red Legged Partridge with a flock of chicks hiding from us at the side of the road (we left them alone after the obligatory photograph), and we both remarked on how pretty the village of Overbury, although the apparent lack of a pub did take the appeal down a couple of notches. 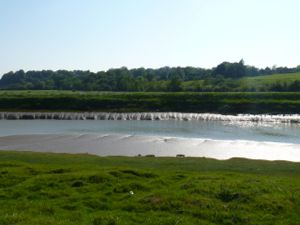 With stunning weather forecast (26 degrees, and not a cloud in the sky), Jules and I headed down to Kent, to go take a walk out from Rye to Camber Sands - which we haven't visited for years.

We started out in the historic town of Rye, but quickly headed east out of town to pick up a footpath which broadly tracks the River Rother south. At Rye Harbour, we cut across the golf course to join NCN route #2 which we then followed into Camber. After a break and a sit down to enjoy the weather we cut north, through Camber and past Chittenden's cottage to the Wainway Wall (neither of them as distinctive landmarks as the O/S map would suggest!), which we followed to MoneyPenny. From there we continued to Brook's Bridge, before dropping down to the River Rother and following the Saxon Shore Way / RMC Path / Sussex Border Path back to Rye. All in the walk was about 11 miles, and took us 4 hrs 45 minutes, including a good break at the beach.

We finished the day off with a lovely meal at The Ambrette in Rye, and a stroll around town to see the old fort and the church before heading back into town. 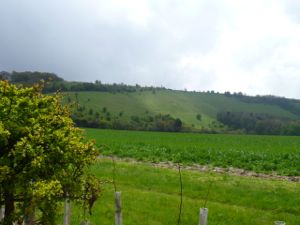 Taking a bit of a gamble with the Bank holiday weather (no, that didn't work out so well), Jules and I headed off to Berkshire to have a go at walk #19 in The Rough Guide to Walks in London & Southeast England - The North Wessex Downs. This turned out to be a moderate-strenuous, 10 mile circular route from Kintbury, taking in Combe Gibbet and Wadbury Hill.

The walk was slighty less picturesque than it could have been, owing to the low cloud and the steady drizzle as we started the walk, but by the end it had cleared up into quite a nice day. This would be a great walk in good weather - after the fairly steep ascent up Inkpen Hill there are great views from the top.

Overall the walk took us about 4hrs 20 including a short break for lunch and a stop at The Crown and Garter in Inkpen, where Chris the landlord very kindly brought us a cup of tea despite being closed for the afternoon - which was very much appreciated.... 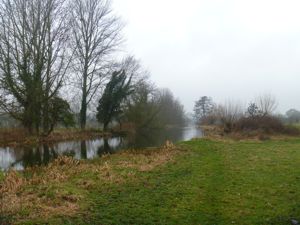 With a slightly optimistic opinion of the weather, we headed out to Essex to try a walk which was much enthused about in The Times. We actually did Walk #39 from Time Out #1, but from the SWC website. This ended up being a 10.7 mile circular walk, starting and ending in Manning Tree, rated as 4/10 toughness and which took us 3 hrs 25 minutes not including lunch and afternoon tea.

The general consensus was that this walk would have been much more impressive in good weather - with the rolling hills, pretty rivers and picturesque views that typify this part of the world. In the grey mist and gentle drizzle it was all a bit less joyful than it could have been.

We stopped at The Marlborough in Dedham for a perfectly reasonable pub lunch, and at the National Trust Tea rooms in Flatford for a very good mid afternoon break before heading back to Manningtree. 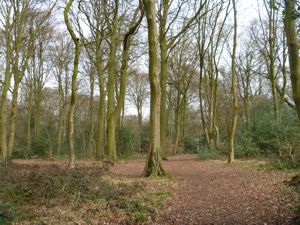 Taking advantage of a rare fine day in March, Jules and I headed out to try route #25 in The Rough Guide to Walks in London & Southeast England - Misbourne Valley.

This turned out to be a 10 mile (although we think it was a little less) circular walk from Amersham via Chalfont St. Giles. The route is quite easy to follow and does take in some of the rolling hills of the Chilterns but there's a constant hum from the A413 for most of the route and we both finished thinking that there are more picturesque routes in the Chilterns, hence we only rated this "OK".

Overall the walk took us about 2hrs 3 min, and we suspect that it's a bit less than the quoted 10 miles. After a less-than-warm welcome by the landlord we passed on the Fox and Hounds (which was the recommended pub) and went for an excellent lunch at The Crown instead. 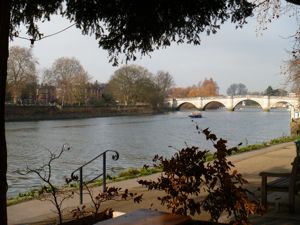 With a clear, bright but very cold day forecast, Jules and I headed to the Thames to take a stroll along the Thames from Kew to Richmond, then up into Richmond Park.

Starting out in about zero degrees, from Kew we made our way to the river and headed west along the Thames Path. The joggers were out in force, but otherwise it was remarkably quiet - we guessed that the cold was putting people off, and it didn't get much above zero degress all day. This is a route that we know quite well, and it's pretty hard to get lost (if you can see the river and you're not wet, you're in the right place). The new thermos made another appearance, and a hot cup of tea was much appreciated at times. We stopped briefly in Stein's restaurant in Richmond for a Rotewurst mit senf (Sausage ina bun to you and I) before heading up into the park for a quick loop back to the station.

I wouldn't really call this a proper walk, but all in it was 7.5 miles, and took us just shy of 3 hours, with a couple of breaks. The notable parts of the trip (apart from the wurst) were seeing a woodpecker in Richmond park and a couple of the resident parakeets.