Very keen to get out of the house for a short break Jules and I headed over to Spiez on the Thurnersee for a few nights away. We deliberately chose the week after Easter in the hope that it would be a little quieter and to give us a proper break after a slightly hard Q1 in lock-down. 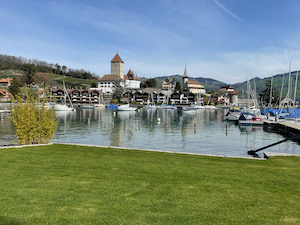 The days broke down as follows:

We decided to head off early on Monday to make the most of one of the forecast-good days with a walk. We had a fairly easy journey over to Spiez and arrived a bit before lunchtime. The chosen route was the "Rund Wanderweg Spiez", which was a well marked route around the outskirts of the town, and taking in the local views and sights. The route heads around the harbour underneath the Schloss before following the lakeshore along to Faulensee. From there the path climbs up to the Seeholzwald underneath the Niesen, where we stopped for a bite of lunch. Suitably refreshed we continued on around the back of Hondrichhügel and past the Stauweiher and up to the Spiezberg before looping back down into town. This was the first outing using the SwissTopo app. The initial verdict was that it's quite good for planning (once you get the hang of it [cough], and not bad for tracking, but the stats aren't right compared with a Garmin watch and MotionX GPS on the same phone.

Arriving back in town, we checked into the hotel Belvédère, first impressions being a good hotel and a lovely room. After freshening up we took a stroll into town and had a bargain Aperol Spritz for only Fr. 5! Dinner at the hotel was a surprisingly good four courses, with a glass of the excellent local Riesling. Exhausted from the day we collapsed into bed and fell asleep despite the storm which blew in overnight.

We woke up to a dusting of snow, but bright blue skies. We decided that it would be a good day to head into Thun, to do a bit of shopping and to try to visit the Brauerei Thun. We were a little distracted en-route by a shopping centre, but had a very successful visit including some much needed outdoor kit [cough]. From there we headed into Thun for a wander around. The centre of the old town is very pretty, with the Aare running through canals and old wooden bridges, but it was a little cold to spend very much time outdoors. We did manage to find the brewery, only to be told that they didn't actually sell beer, and so we left empty-handed. Overall though it was a very successful day out, with better weather than we had expected.

Dinner at the hotel was once again very good, we were both impressed by the food (in particular the truffle butter - rapidly becoming a favourite of mine) and the service. 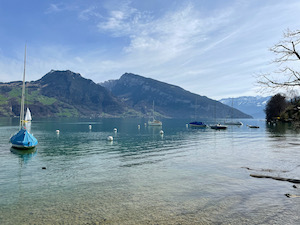 We woke up to even more snow, and after another good breakfast we headed off for a stroll around Spiez town. We found the vineyard for the local Riesling which we'd been enjoying the last couple of days, but failed to find the The Thunerbier in COOP. The less said about the Bea centre the better - we wouldn't recommend going. In the afternoon we managed to go for a short run along the lakeside - a bit hard work after all the dinners, but felt a bit better for it. In the afternoon we enjoyed a glass of bubbly in the Captain's bar before another excellent dinner.

We got up fairly promptly and after a good final breakfast we packed up the car and slightly reluctantly checked out. We decided to go for a short-ish walk on the way home, a circular walk around the village of Aeschi. The weather was once again very kind to us, with spectacular views over the lake and the surrounding mountains. The only slight complication was yours truly forgetting to change shoes for hiking boots, which partially contributed to a slip in a muddy field. Hilarious for everyone who wasn't me!