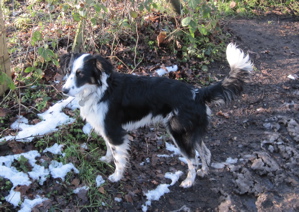 A collection of walks over the Christmas period 2009.

The family Boxing day walk was well accompanied for the first year by Tess, and was a circular walk around the village. The rain held off until we were nearly home, but even those who managed to stay dry from the rain ended up with wet feet crossing an over-flowing stream on the last leg back home! Tess was remarkably relaxed despite all the confusion, presumably to the point of not being able to hear the calls to "come here"....

On New Years Day Jules and I went for a walk taking in Regents canal and Hampstead Heath. The weather was lovely, it was a perfect winters day, crisp and clear and bright - sunglasses all round. 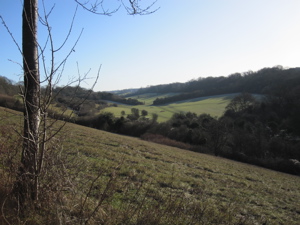 On Saturday we went slightly further afield, trying out the Time Out walk # 15 (Coulsdon South Circular), which proved to be a very pleasant 9 mile circuit starting in Zone 6, South London. Jules was navigating, doing a sterling job despite all the concrete markers having been removed, along with the numbers from the gates (both of these form critical parts of the directions in the book).. Once again the weather was very kind to us, with clear skies and bright sunshine. Fortunately the ground stayed mostly frozen (except for about 0.5 mile on the way back) so we didn't get as muddy as we might have done, had it been a few degrees warmer. The walk was rated 4/10 for toughness and about 4:30 walking. We did it slightly faster, but agreed with the grading. We'd recommend this walk to anyone who fancies a nice, not overly strenuous walk, easily accessible from London Bridge. 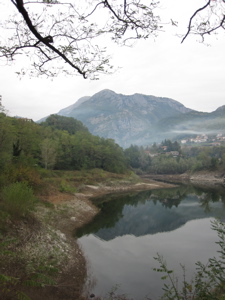 For our main summer holiday, Jules and I spent a week walking in Tuscany. The group of people we went with were great, and our guide Sarah (ably assisted by Sabina) made sure we went to the top of all the big hills! We stayed in

Braccicorti, which used to be a local farmhouse, now run by the family as a "Agritourism" which is a European/Italian Government initiative to encourage tourism at a local level. The weather was a bit colder than we had expected (we caught the first snow of the season), but this didn't really deter us. The scenery was beautiful, and the walking varied from moderately strenuous to gentle strolls, depending on the day and conditions. 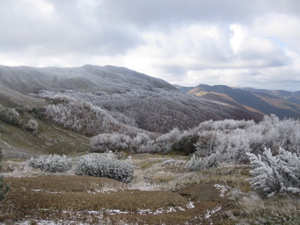 We did the most climbing on the first day, achieving slightly over 600 metres vertically in the morning, followed by a more circuitous route down (see Jules pointing at the destination first thing in the morning, while we were still smiling!) The second day was definitely the coldest, and we even managed to make a little snowman! The rest of the days varied between a low-level local walk around the nearby villages, and we even went caving on Thursday when the weather was a little inclement.

All in all we had a very good holiday, although we'd probably have been slightly better off going a bit earlier in the year, when the weather was a bit warmer. We were expecting some late summer sun, and it was definitely closer to Autumn! The grade of walking was about right for us, with a mixture of A and B grade, which left us pleasantly tired, rather than exhausted. 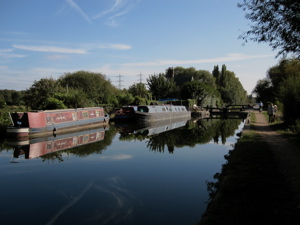 Continuing our theme of weekend cycling trips, we took the train to Hackney Wick and from there dropped into Lea Valley park. We followed the National Cycle Network route 1 on our way North, and then cam back along the side of the canal. The weather was perfect for a day outdoors, bright, sunny and warm without being too hot.

The cycling in the park is excellent, with good surfaces ranging from tarmac to compacted gravel, and there were few enough other people around that making progress wasn't hampered by constantly having to make way. We managed a good day of cycling, with legs slightly aching by the time we finished...

Eating and drinking is no challenge, with numerous cafes and pubs in and around the park. The cafe at Springfield was such a pleasant stop that we ended up going there twice. 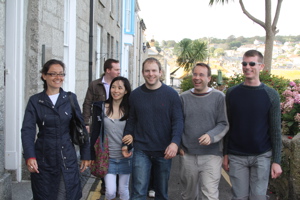 Many thanks to Misuk (and Peter) for organising the trip down to Penzance for the bank holiday weekend. A great time was had by all, and it was really good to chill out and spend some quality time with friends. We arrived by a variety of methods during the day on Friday, but we were all there by mid-afternoon, and ready to sample the champagne that Pierre had kindly arranged! 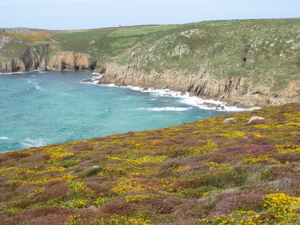 On Saturday, taking advantage of the better weather forecast, we went for a walk from Land's End, to Mousehole. This walk followed the South West Coast path for ca. 12 miles, and the views in places were spectacular. The stark cliffs were outlined by the blue of the sea, and the heather and gorse provided a vivid contrast on the hilltops. The walk itself was quite challenging, as the path was quite rocky in places (almost scrambling along the last section into Lamorna). We'd allowed 6 hours, but in total the walk was closer to 8 (to give us time for photos and a decent lunch, naturally!). Notable moments on the walk were spotting a shark in the sea below some cliffs, and Jules coming face to face with a snake (to the surprise of both)! 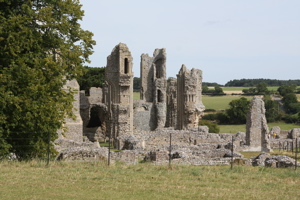 Jules and I took a long weekend up in Norfolk, in Holt in August. We both wanted to get out for a bit, and to do some walking and generally chill out. We stayed at Byfords in Holt, which we would thoroughly recommend, as the service, accommodation and food were superb! We stopped in Norwich on the way up from town, and narrowly avoided spending far too much in outdoor shops, in a fit of enthusiasm. After arriving mid-afternoon, we explored the area around the village before settling down to a good meal in Byfords. 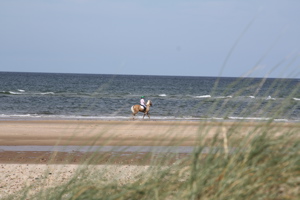 On Saturday we enjoyed a good walk from Wells-next-the-sea along the beach to Lady Ann's drive, and then round Holkham hall before heading back to Wells. The weather was very kind to us (fortunately we were carrying plenty of water), and gave us a good excuse to stop for ice-creams! We also managed to get out for a good walk at

Blakeney on Sunday morning, around the side of Blakeney National Nature Reserve (salt marshes and mud flats) before heading back to town 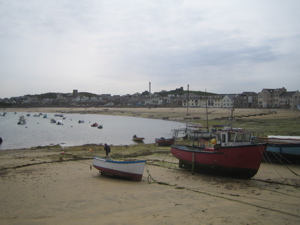 The major trip for the summer was sailing from Southampton to Cork with my father, Bryan and Walt. We set off Wednesday 3rd June, with the aim being to make it to Cork on or before the weekend of the 13th/14th.

The trip was in three major parts, the first was the long run down to the Scilly Isles (which actually turned out to be quite short), followed by a couple of days rest and recuperation in St. Martins and environs. We were very fortunate in having a south or south-easterly for most of the journey down, which took only 46 hrs, watch sailing. The boat was running well and all in all the journey (which we might have expected to be a little challenging) was easy and pleasant. We then rested up in the IOS for a couple of days, of which the weather was a bit mixed, but we were able to get out to see some of the other islands, including a day trip over to, and walk around Saint Agnes. 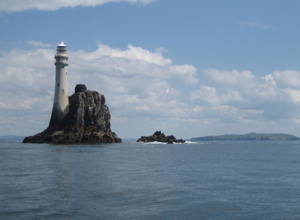 The second leg of the trip was across the Celtic sea to arrive in Baltimore. With a 4-5 occasionally 6 from the North East and scattered showers forecast we set off on Sunday morning. The weather was slightly more inclement than forecast, with heavy showers for most of the way and more 6 than 4 or 5! Still, the boat is more than a match for those conditions, and with Amy doing a characteristically excellent job on the helm, we made it to Baltimore in a little over 24 hours. The biggest surprise of the trip was picking up a couple of

passengers on route (ca. 60 miles from land), who were keen to get out of the storm! The third leg of the trip was the journey from Baltimore up to Cork, with the slight detour to take the obligatory photos of Fastnet! We were day sailing, and stopped in at Glendore Harbour to overnight. Many thanks to the (unknown) divers who, in the true spirit of Irish hospitality, donated the lobster and scallops for dinner that night, they truly were delicious! We finished with a nice sail into Crosshaven on Thursday evening, followed by an excellent meal in the Anchor Inn to close out a great trip. Many thanks for organising Dad. 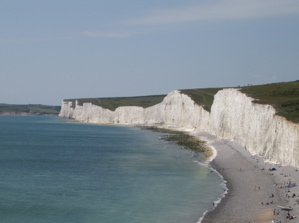 With the weather forecast good for the bank holiday, and in need of a relaxing weekend, Jules and I decided to take a walking day-trip along the south coast. The train to Eastbourne was pretty easy and convenient (Southern even managed to run an undisrupted service on time, to our amazement).

The weather was good, bright, sunny and warm, although there was a bit of a breeze on the exposed parts of the cliff edges. After a constitutional ice cream (and no difficulty whatsoever finding the well signposted route) we set off.

The route we chose sounded like a long, but gentle stroll from Exceat (about 8 miles west of Eastbourne on the A259) along the South Downs way to Eastbourne. Unfortunately it wasn't until I took a closer look at the map and realised that the cliff edge walk that I'd planned had quite a few hills along the way. Most are not particularly high (maybe only 20 metres vertical gain) but they are steep and there are quite a few of them. We were both feeling our legs by the time we stopped for lunch. Luckily we were well stocked with food and water and we made good progress along the spectacular cliffs making our way up to Beachy Head. The route is easy to follow, and enjoyed by a wide variety of walkers, who were out in force that day! 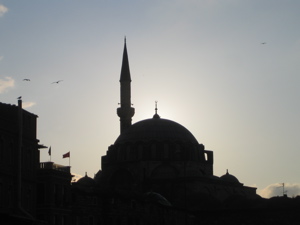 Jules and I spent a long weekend in Istanbul at the beginning of May - the weather (which had been forecast not so great) turned out to be perfect for seeing the city. Not so hot that it was unpleasant to walk around, but warm enough to spend time outdoors. We generally found the city to be vibrant and exciting, and after a short while we got used to being invited into restaurants and shops (a polite smile and a "no thank you" seemed to work as a reasonable refusal, generally accepted without rancour).

All in all we enjoyed the trip, and would recommend it to anyone who hasn't been. Pieces of advice that we'd offer would be: 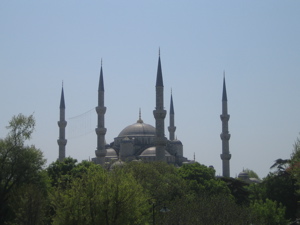 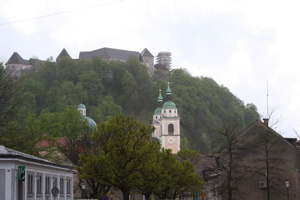 Fat Boys on Tour, part III. Once again, many thanks to Slick for organising the annual trip away. The choice of venue was excellent, as was the accommodation, right in the centre of town.

A very picturesque city, in (what I think of as) a classical European city setting - a castle sitting on a hill above a bend in the river. Lots of very pleasant bars and restaurants in the "tourist" part of the city (although frankly anyone who's braved the Tower of London wouldn't exactly consider it particularly touristy). 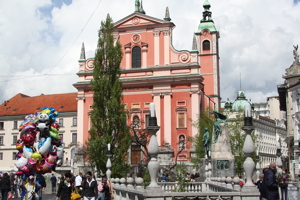 Flights on EasyJet make the city accessible at a reasonable price from the UK and, happily as yet, it's not overrun by stag-dos. The standard of English spoken is generally very good, for those whose Slovenian isn't ...quite up to scratch.

As is usual with the FBoT most of the weekend was taken up with feeding Tug at regular intervals, and keeping Big Jim appropriately watered, with plenty of monuments and historic sites thrown in. The hill up to the castle (why do they always build them on hills?) did require a little ... encouragement in some quarters, but the view at the top was worth recording for posterity.